On Tuesday morning, the FIA announced that changes will be made to Formula 1’s technical regulations ahead of the 2019 season in order to promote more overtaking. At face value, this proposition is mouthwatering to fans who enjoyed the novelty of seeing Daniel Ricciardo tear from sixth to first in a frenetic 10 laps during the Chinese Grand Prix.

However, could an early step towards the new-look F1 of 2021 be a dangerous distraction that could ultimately devalue the art of overtaking?

END_OF_DOCUMENT_TOKEN_TO_BE_REPLACED

Who doesn’t love a spot of fan fiction? The internet has become a breeding ground for theories spawned from those ‘what if’ questions generated at the end of films, TV series and even sporting spectacles.

What if Anakin Skywalker had the ‘high ground’ on Mustafar at the climax of Star Wars: Revenge of the Sith? Or, closer to home, what if Lewis Hamilton didn’t catch and pass Timo Glock on the final lap at a soggy Interlagos in 2008?

The 2017 Formula 1 season has featured several intriguing narratives thus far that could trigger many ‘what if’ scenarios. For instance, in a world without the elite three of Mercedes, Ferrari and Red Bull, what would the championship picture look like at this halfway stage?

With the numbers crunched, here are the facts and figures;

END_OF_DOCUMENT_TOKEN_TO_BE_REPLACED

With the introduction of radically revamped regulations in 2017, teams have certainly stretched their technical resources over the winter. However, it’s not just the technical minds that have been made to work, with the graphics department also using up plenty of pen ink.

McLaren have brought an “orange-is-the-new-black” livery to the grid. Toro Rosso have ditched their painted bull in favour of plugging Red Bull’s ‘Simply Cola’ brand. Sauber have gone for gold accents to celebrate 25 years in the sport.

After striking a new commercial deal, Force India become the latest to reveal a striking livery. Like it or loathe it, a pink car is quite a statement. Good for Force India and a great indicator that F1 is in good health.

END_OF_DOCUMENT_TOKEN_TO_BE_REPLACED

Force India are often labeled as F1’s best team. They may not have the manufacturer muscle of Mercedes, the heritage of Ferrari or World Championship trophies littering their lobby, but what they do have is an effective design team who convert their available resources into the maximum available points.

A record-breaking fourth place finish in the 2016 Constructors’ Standings was their well-earned reward. It seems implausible that they can improve upon what was a remarkable 2016 and break into the top three.

However, Vijay Mallya certainly believes it to be possible. On Wednesday, the team unveiled their 2017 challenger – the VJM10 – and it is certainly a bold design to match their big ambitions.

END_OF_DOCUMENT_TOKEN_TO_BE_REPLACED

Marcus Ericsson has been a driver seemingly trapped in midfield obscurity, without a clear path to the limelight, for some time. He quietly arrived at a Caterham outfit about to plunge into disaster in 2014 before silently switching to Sauber, where more forgettable performances characterised his 2015 season.

I’m sure by this point, Ericsson fans have clicked elsewhere. They stopped reading too soon.

END_OF_DOCUMENT_TOKEN_TO_BE_REPLACED

Pascal Wehrlein, Esteban Ocon, Felipe Nasr, Dave from the chippy and Steve from accounts have all seemingly been linked to the Force India seat for 2017. In Thursday’s Drivers’ Press Conference ahead of the Mexico Grand Prix, Esteban Gutierrez threw his name into the ring in not-so-subtle fashion.

END_OF_DOCUMENT_TOKEN_TO_BE_REPLACED

With the European season set to begin in earnest with this weekend’s Spanish Grand Prix, teams will look to deliver their first major update package of the 2016 season. Force India have hinted that their car could look very different when it takes to the track in Barcelona, as the team are set to introduce significant changes to the VJM09, which has – up until now – proved a touch underwhelming. 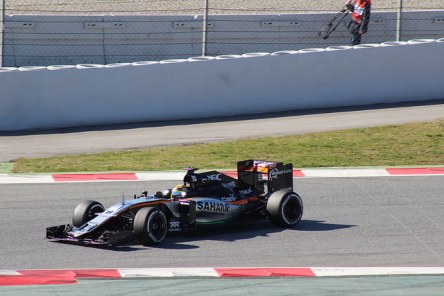