Haas have made an early impression on the paddock. The American based squad converted their excellent pre-season into a strong debut weekend, as Romain Grosjean took full advantage of a timely red flag to secure sixth place. Eight points already on the board for F1’s youngest team and their lightening start has certainly put pressure on Sauber and Manor as the teams who stand the most to lose should Haas continue to shine. 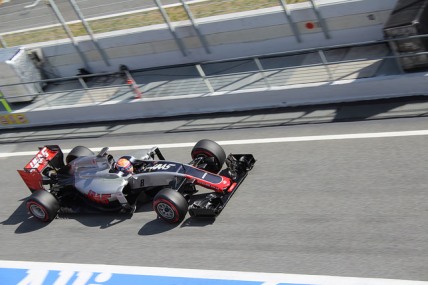 Early indications are that Haas’ unique approach to entering the sport is going to become the model for successful entries in the future. The team have taken a pragmatic stance, buying as many listed parts as possible, moving into an existing F1 factory at Banbury, (their UK base) and developing technical partnerships with Ferrari and Dallara.

The proof is in the pudding. While Manor, nee Marussia and Virgin, have managed to score just one point since their first season of competition in 2010, Haas’ eight points have come in just one race. Granted, circumstances worked in their favour, with the timing of the red flag allowing Grosjean to complete a no-stop strategy.

The result is the best by a start-up F1 team on debut since Mika Salo claimed sixth at Melbourne in 2002, driving for Toyota.

Following on from the pragmatism of pre-season, team founder and chairman Gene Haas stated; “There’s a new F1 team on the block and it’s an American F1 team, so we’re real proud of that. But these other teams are pretty dang good at what they do. I wouldn’t sit here and say we’re going to be in front of them all the time, but today [Sunday] was a good day.”

The eight points will certainly put the pressure on the likes of Sauber and Manor. Both teams are believed to be struggling financially, meaning that end of season prize money is crucial. With the rewards structure meaning that the eleventh placed team is hugely disadvantaged, finishing bottom of the table could spell disaster to either outfit.

Given their unspectacular Australian Grand Prix weekend, where points never looked likely for neither Sauber nor Manor, Haas’ early score should already be a concern for them. Come November, Grosjean’s efforts in March could be a season defining factor.

Despite being F1′ newbies, Haas already have a target on their back.

Have Your Say Cancel reply